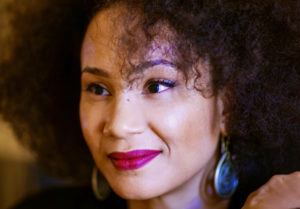 Monique Bingham has been responsible for some of the most poignant, soulful jazz-infused house music of the past 20 years. Her career began fronting the “acid jazz” horn heavy band Abstract Truth in 1995 whose seasoned members boasted stints with jazz gods Miles Davis, Herbie Hancock and Sun Ra to name a few. Their first single, “Get Another Plan” was recorded at Francois K‘s legendary Axis studios and received international critical acclaim once picked up by UK music guru Gilles Peterson’s imprint “Talkin Loud” in 1996. The follow up single “We Had a Thing” released in 1998 became an indisputable soulful house classic due to German producer Matthias Heilbronn’s infectious house remix and it’s inclusion on South African DJ Fresh’s 2000 House Flava compilation.

Once injected into the veins of the underground, Ms. Bingham’s penchant for painstakingly crafted lyrics and left of center melodies caught the ears of some of the house scene’s most respected dj/producers like Kerri Chandler, Jellybean Benitez, Karizma and Ralf Gum.

In 2011, Monique completed her first self-produced single “You.Me.World“ released on her own record label Bigga Sounds. That same year she performed for the first time in South Africa at the 12th annual Capetown International Jazz Festival sharing a bill with jazz heroes Wayne Shorter, Esperanza Spalding and soul legends Earth Wind and Fire.

While the house scene remained largely underground in the US, Europe and Asia, the South African house scene exploded. Her 2012 collaboration “Take Me To My Love“ with Ralf Gum became a runaway crossover hit in the country. She was the first ever non-South African artist to perform live at the 12th annual Metro FM awards in 2013 for a television audience of over 10 million viewers. And her collaboration with one of the world’s greatest living jazz legends and human rights activist Hugh Masekela entitled “With her Hand” has made her a fixture on festival stages throughout Southern Africa ever since.

Monique’s 2 decade milestone in the recording industry was marked by the release of her first album: “Best of the Last/Anthology:1995-2015” featuring 26 classic as well as new house tracks with grammy award winner Louie Vega, Todd Terry, and South African house king and 2016 BET ward winner Black Coffee. Their collaboration “Deep in the Bottom (of Africa)” has cemented her standing as part of the Mzansi music revolution. She remains one of the most interesting and enduring artists the New York City underground has ever produced. “After 20 years of making music I almost feel like I’m just getting started. I have so much more to say and in some ways I’m more excited now than I was back in ’95. The future is wide open.” – Monique Bingham